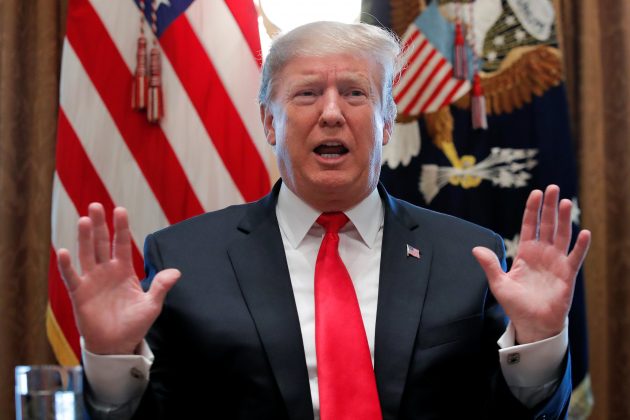 U.S. President Donald Trump speaks during a meeting to "discuss fighting human trafficking on the southern border" in the Cabinet Room of the White House in Washington, U.S., February 1, 2019. REUTERS/Jim Young

WASHINGTON (Reuters) – President Donald Trump said on Friday he might declare a national emergency to obtain funding to build a wall along the U.S. border with Mexico because it did not appear Democrats were moving toward a deal that would provide the money.

“We’re not getting anywhere with them,” Trump said during an event at the White House.

“I think there’s a good chance that we’ll have to do that,” he added, referring to the possibility of an emergency declaration that could allow him to use funds that Congress has approved for other purposes.

His comments came a day after Nancy Pelosi, the Democratic speaker of the House of Representatives, told reporters, “There’s not going to be any wall money” in legislation to fund border security for the rest of this year.

Pelosi said funding for more ports of entry or additional border security technology was open for negotiation. She added that the 17 House and Senate negotiators working on legislation to fund homeland security for the year should decide the components of the nation’s border security.

Democratic negotiators unveiled a detailed opening position containing no money for any type of additional physical barriers on the border to control the flow of undocumented immigrants and illegal drugs. Previously they had supported $1.3 billion for new fencing and improvements to existing barriers.

Trump has said he has to have a wall for border security.