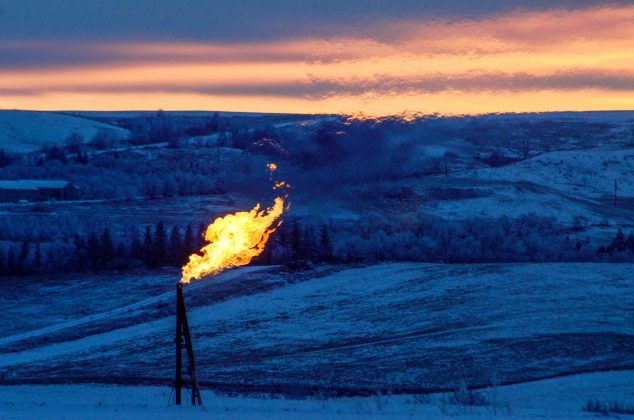 (Reuters) – Several utilities urged customers to cut back on power and gas use on Thursday during the brutal freeze blanketing the eastern half of the country after U.S. homes and businesses used record amounts of natural gas for heating on Wednesday.

Harsh winds brought record-low temperatures across much of the Midwest, causing at least a dozen deaths and forcing residents who pride themselves on their winter hardiness to huddle indoors.

As consumers cranked up heaters to escape the bitter cold, gas demand in the Lower 48 U.S. states jumped to a preliminary record high of 145.1 billion cubic feet per day on Wednesday, according to financial data provider Refinitiv.

That topped the current all-time high of 144.6 bcfd set on Jan. 1, 2018. One billion cubic feet is enough gas to supply about five million U.S. homes for a day.

In Michigan, automakers agreed to interrupt production schedules through Friday after local utility Consumers Energy made an emergency appeal to curtail gas use so it could manage supplies following a fire at a gas compressor station on Wednesday.

Fiat Chrysler Automobiles NV said on Thursday it canceled two additional shifts at its Warren Truck and Sterling Heights Assembly plants and General Motors Co said it was suspending operations at a total of 13 Michigan plants and its Warren Tech Center.

Ford Motor Co said it had also taken steps to reduce energy use at its four Michigan plants supplied by CMS.

Consumers, a unit of Michigan energy company CMS Energy Corp, said that the Ray compressor station in Macomb County was partially back in service but urged all of its 1.8 million Michigan customers to continue their conservation efforts through Friday.

Elsewhere in Michigan, DTE Energy Inc asked its 2.2 million power customers to reduce electric use voluntarily to help safeguard the reliability of the regional grid.

PJM, the electric grid operator for all or parts of 13 states from New Jersey to Illinois, said there were no reliability issues and noted that power demand had already peaked on Thursday below 140,000 megawatts.

While the brutal cold boosts gas use for heating, it can also reduce production by freezing pipes in gathering systems in producing regions, called freeze-offs.

Gas production in the Lower 48 states was projected to fall to a four-month low of 84.9 bcfd on Thursday due primarily to freeze-offs in the Marcellus and Utica, the nation’s biggest shale gas-producing region in Pennsylvania, Ohio and West Virginia, according to Refinitiv.