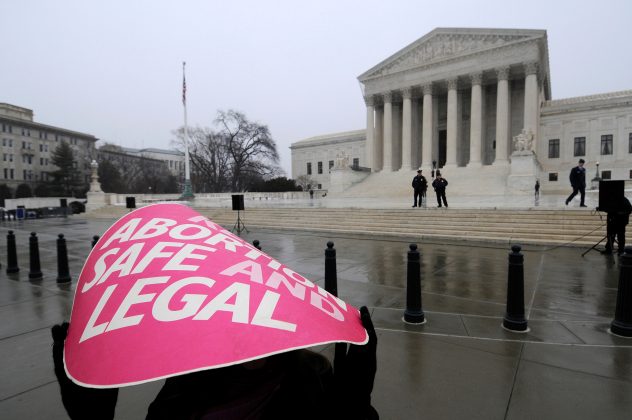 FILE PHOTO -- A woman holds a sign in the rain as abortion rights protestors arrive to prepare for a counter protest against March for Life anti-abortion demonstrators on the 39th anniversary of the Roe vs Wade decision, in front of the U.S. Supreme Court building in Washington, January 23, 2012. REUTERS/Jonathan Ernst/File Photo

On the 46th anniversary of Roe V. Wade, the state of New York passed a law called the Reproductive Act that not only removes abortion from the criminal code and allows other medical professionals who are not doctors to perform abortions but is also designed to continue to give access to abortion if the historic case is ever overturned in the Supreme Court.  This new law also allows abortion at 24 weeks if the fetus is not viable or when necessary to protect the life of the mother. For those that are Pro-life, this new law is devastating and once again asks the question of when is a child viable or when can it exist (even with help) outside of the womb.

When does an unborn child have rights?  When is the age of viability? These questions plague the abortion debate.  According to studies between 2003 and 2005, 20 to 35 percent of babies born at 23 weeks of gestation survive, while 50 to 70 percent of babies born at 24 to 25 weeks, and more than 90 percent born at 26 to 27 weeks, survive. As medical treatments have advanced, many doctors have the opinion that those percentages have gone up for those born at 23 weeks.

Abortion existed long before Roe V. Wade.  Before the Supreme Court decision, thirteen states allowed abortion in cases of danger to a woman’s health, rape, incest or the likelihood that the fetus was damaged.  Two states allowed only if the pregnancy was a danger to a woman’s health, In one state abortion was allowed only in the case of rape. Four states gave full access to abortion simply on request. But there were thirty states where it was absolutely illegal to have one.

Because of the Roe v. Wade decision, abortion is now legal in every state and has at least one abortion clinic.  If Roe V. Wade was shot down by the Supreme Court, this would then pass on the responsibility in every state of the union to decide on their own regulations, definitions and laws.

Probably the most surprising poll result was in asking the question, ‘Would you like to see the Supreme Court overturn its 1973 Roe versus Wade decision concerning abortion, or not?’, 64% said they did not want it to be overturned, 28% wanted the decision to be overturned and 9% had no opinion.

No matter where you stand on these issues, the question of Roe V Wade has spurred many states to make a clear stand on their position.  Eleven states have attempted to pass bills which would prohibit abortion after a heartbeat has been detected during pregnancy.  Most of these have passed through legislation but are now tied up in Federal Courts. Other states such as New York and recently Virginia, have tightened up their support on abortion, designing their laws and bills to continue offering abortion should Roe V. Wade be overturned.

On January 30th, 2019,  The National Right to Life Committee (NRLC) released The State of Abortion in the United States, 2019 report. In addition to summarizing key legislative developments in the states and at the federal level, the sixth annual report also analyzes data on the annual number of abortions in the United States. The report also dissects the 2017-2018 annual report of the nation’s abortion giant, Planned Parenthood.  According to their data collected from abortion clinics and doctors around the country, almost 61 million babies have been aborted since Roe V. Wade.

The key to supporting Mothers as well as supporting the life of the unborn is still under debate but many have suggested that education, financial means to support and untangle the bureaucracy for those willing and wanting to adopt, funding for those who want birth control including tubal ligation and vasectomies as well as counseling for those considering abortion are only a few of the suggestions states are considering.

Overturning Roe V. Wade would be only the first step to moving beyond the rights of Women, vs Rights of the unborn.  It is when we value ALL lives will this long debated argument be put to rest.