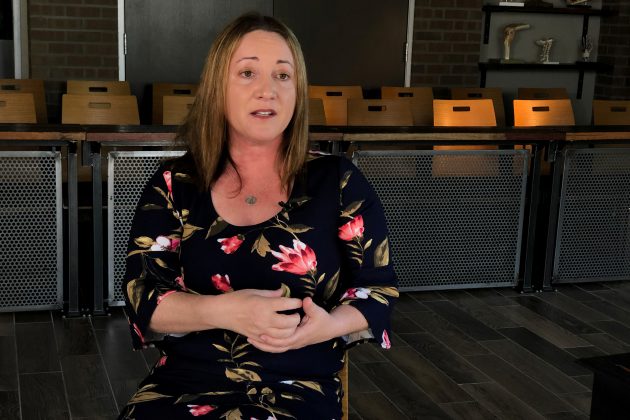 Lori Alhadeff, a newly elected school board member in the community where her daughter, 14-year-old Alyssa, was killed in the 2018 shooting at Marjory Stoneman Douglas High School, speaks during an interview in Fort Lauderdale, Florida, U.S., January 17, 2019. REUTERS/Kevin Fogarty

PARKLAND, Fla. (Reuters) – After screaming out on national television for President Donald Trump to “please do something” to prevent another school shooting like the one that had just killed her daughter, Lori Alhadeff heeded her own call for action.

She was powerless when gunfire silenced 14-year-old Alyssa on Feb. 14, 2018. But in the year since 17 people died at Marjory Stoneman Douglas High School in Parkland, Florida, Alhadeff ran for the local school board and won. She started a non-profit. She raised money to equip schools with bulletproof glass and emergency medical stop-the-bleed kits.

On Wednesday, she was in New Jersey, her former home, to watch the governor sign an “Alyssa’s Law” named after her daughter. She hopes other states will follow in requiring schools to have silent panic alarms to notify law enforcement in emergencies.

“I had no control on Feb. 14. And as a mother, when you have your children, you need control,” Alhadeff said in an interview with Reuters. “But now I have the control. I have this power, and I am using that power by using my voice.”

Alhadeff is among the Parkland parents who have channeled their anguish into advocacy. Instead of dance recitals, soccer matches and marching band performances, their schedules now involve lobbying trips to state capitols, the U.S. Congress and the White House.

Some served on a state commission that reviewed the Parkland shooting, documenting each failure before and after the firing of the first bullet in a freshmen classroom building. Others have waded into partisan politics to campaign for local and federal candidates pledging to do more for school safety.

For Fred Guttenberg, fighting for gun control is a way to cope when he thinks about the final moments for his daughter, Jaime, who ran down a hallway with a shooter at her back.

“What I have discovered this year is I have this need to still be Jaime’s dad,” he said. “I am not going to ever stop talking about my daughter and what she meant to me &ndash; and what the moments without her mean to me.”

Success can be both satisfying and hollow.

“It doesn’t bring my son back,” said Max Schachter, who has focused on identifying best practices for school security after his son, Alex, died with Alhadeff’s daughter in English class.

Alhadeff, 43, once ordered her life around her children’s soccer teams. She now races between school functions and activities for the non-profit, Make Our Schools Safe, she started after Alyssa’s death.

“I know that she would say to me, if I was like sleeping in bed: ‘Mom what are you doing? Why are you wasting your time? You need to get out there and fight for me,'” Alhadeff said.

As a stay-at-home mother of three, Alhadeff jokingly called herself Alyssa’s personal assistant. She drove her daughter to the movies, the beach and sporting events – even laying out her shoes with the laces turned just so for her to slip right on.

While her children were at school, Alhadeff played tennis and grocery shopped. To support their teams, she sold cookies and Gatorade at their soccer games.

Last month, Alhadeff cried while recalling those memories. She was again sitting on the sidelines, watching her second child practice soccer where his sister once played. He wears Alyssa’s No. 8 on his jersey.

It was at an adjacent park that Alhadeff asked a reporter for a microphone following the school shooting, not long after making preliminary plans for her daughter’s funeral.

Angry with raw grief, she begged Trump in a live CNN broadcast to take action because she said he was the most powerful person who came to mind.

Late last year, Alhadeff joined a group of Parkland parents to meet with Trump at the White House and discuss a national safety commission he created after the shooting.

Her anger has eased, she said, as she focuses on school safety as the only new member of the Broward County School Board, where she is calling for the removal of the superintendent in charge when her daughter was killed at school.

She has planned a full day to mark the one-year date from Alyssa’s death – gravesite prayers, lunch at her house, a clean-up event at Alyssa’s favorite beach and community memorial. Staying busy is better than having too much time to think, she said.

But in quiet moments, when she needs to feel close to Alyssa, Alhadeff dabs on perfume from her daughter’s pink Victoria’s Secret bottle. She wears her daughter’s gray sweatshirt with white splotches, which Alyssa bleached in a laundry mishap.

“I am just trying to live for her,” she said.