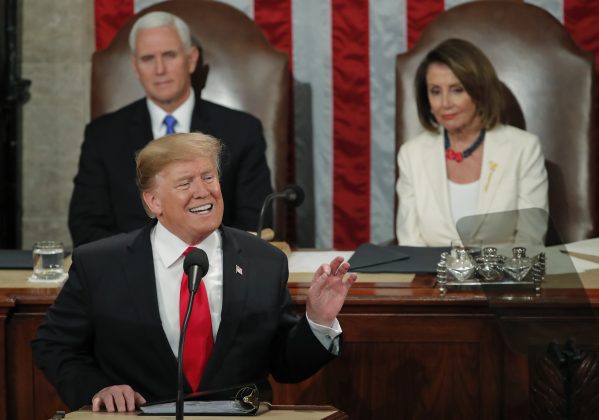 U.S. President Donald Trump gestures during his State of the Union address to a joint session of Congress on Capitol Hill in Washington, U.S., February 5, 2019. REUTERS/Jim Young

WASHINGTON (Reuters) – U.S. President Donald Trump called for curbs on late-term abortion in his State of the Union address on Tuesday, citing controversies over the issue in New York and Virginia.

Using emotive language, Trump waded into what has long been a divisive issue in American politics, even though the procedure was legalized in a Supreme Court ruling more than 40 years ago.

“To defend the dignity of every person, I am asking the Congress to pass legislation to prohibit the late-term abortion of children who can feel pain in the mother’s womb,” Trump said.

“Let us work together to build a culture that cherishes innocent life. Let us reaffirm a fundamental truth: all children – born and unborn – are made in the holy image of God,” he said.

The issue of whether a fetus feels pain has been raised frequently in recent years by abortion opponents pushing for more restrictions in state legislatures. Medical opinion on the issue is not conclusive.

With the confirmation last year of Trump’s pick for the Supreme Court, Justice Brett Kavanaugh, conservatives now have a 5-4 edge on the nation’s highest court, raising fears among abortion rights supporters that the 1973 Roe v Wade ruling could be weakened or overturned.

In his speech, he said lawmakers in the state “cheered with delight” at the law “that would allow a baby to be ripped from the mother’s womb moments before birth.”

The Republican president also seized on a controversy surrounding Virginia Governor Ralph Northam, repeating Republicans’ accusations that Northam, a Democrat, advocated infanticide when he defended a bill that would have lifted restrictions on later-term abortions.

The embattled Virginia governor is facing a separate controversy over a racist photo in his 1984 medical school yearbook, but has resisted calls to resign.